Pamela Vass
In My Own Words
by John Devereux.  Edited by Pamela Vass and David Hogan 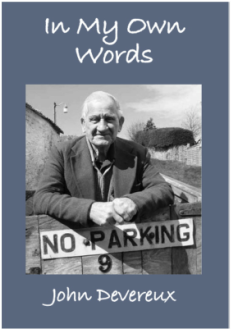 In My Own Words evolved out of times shared in front of Johnny’s coal fire when his recollections were freely given and much enjoyed. Then one day at the beginning of 2007 he asked if I would write his story.

It has been a pleasure and a privilege; one he would be happy to know is now being shared by so many others.

Johnny’s story encompasses a lifetime of experiences: from the harsh and primitive conditions of his childhood; through the trauma of his years in the Bomb Disposal squad during World War II; to civilian life and happier times in the North Devon village he loved so dearly... until we reach his final words:

“So now I’ve come to the end of my story. And great thanks to all my friends for where I am today. And I only hope we’ll go on being friends; which I couldn’t ask for anything better in my life. Thank you one and all.  The story have ended.”

A fascinating, candid and tremendously moving reflection of a life and times slowly receding into history.

I have just read a book purchased from you some years ago while on holiday in Croyde about John Devereux (In My Own Words). i found the book difficult to put down although quite harrowing at times especially when Irene passed away after her own personal battle with Cancer. Thank you for taking the time to put into words John's life story, one which I found truly fascinating.
Johnny died on the 28th February 2008 aged 92.

I was born in a little place called Holmer outside Hereford on October 21st 1915. There was just my sister Lena before me. She was eighteen months older than me. Two years later came my brother, Les, then I had another brother called Reg - he was about another two years younger. Well the next one was Kenny and then after him come my brother Donny about another two years later. Then Joyce was the last one in the family. That's all the little devils together. Joyce was my stepsister, the same mother.

We lived at Holmer for about four years and then we went home from school one night and found all the furniture out on the roadside. Father had lost his job and he had orders to get out of the house within a week. But he wouldn't get out so the bailiffs come along and took all his furniture, all the old bedsteads and everything and put it out on the road. I remember there was a small car waiting, a taxi I suppose. I was bundled with my sister and mother into the taxi and we went into a little cottage with my grandpa in Hereford to live for a while. I'd just started school. I was about four and a half.  Well that was where mother would send me and Lena with a basin and a penny each to a little shop across the road, where the man made soup, to get a basin full of broth. Then one day mother was ironing the clothes, it was a gas iron, before electric, and she'd iron back and forth on the table and dap the iron down and me being a nosey parker put my hand up there. And she put the iron on my hand. All the skin come off. Oh dear, we've had some games.

Well grandpa had a housekeeper and mother and the housekeeper couldn't get on very well. Any road, mother said she couldn't stick it no longer with the housekeeper. Father was working for a brewery with a steam wagon delivering beer various places but he changed his job and went to work on a farm at Hoarwithy (Ed. on the A49 road to Ross from Hereford) He'd got a sister living there in one of the cottages with her husband who was working for the farmer. Mother decides that's where we're going so off we goes again. She bundles up me two brothers, Les and Reg, in an old fashioned pram with long springs on each side, with me and Lena by the side. And off we set to the train at Hereford.

Any road, on the way to catch the train we met grandpa coming home from work and he said 'Ethel,' he said, 'where do you think you'm going?' So mother looked up to him and said, 'I can't get on with your housekeeper. We're going to Hoarwithy to stop for a while.' Any road, we got on the train, never been on a train before in my life, frightened to death, and we got off at Ballingham station.
Off comes the pram, out we get, me and Lena by the side, mother off with the pram with Les and Reg in it, a mile and a half to the house. So we gets along this road and then all of sudden we come to where a lane branches off where a horse and cart have been. So mother decides that's where it is. We get a quarter of the way up, mother begins to blow a bit and says, 'my God I don't know whether I shall be able to make it or no.' Anyway, my brother gets out and me and Lena help mother push the pram up this lane to the old houses.

We had to stop with father's sister to start with because the man who worked for the farm beforehand was a good man and the farmer didn't want to put him out, so he gave him permission to stop until he found a job – perhaps a fortnight or three weeks. Then a cottage come empty, a lovely cottage belonging to this farm. Everything seemed to be going sweet. Of course we had two and a half miles from there to Dewchurch school. On my way I had to take father's lunch out to the field where he was ploughing with the horse. That would be a lump of bread and a big lump of cheese and an onion and a bottle of tea with a sock pulled over the top of it to keep it warm.

Well then, that was all right. Time goes by and us youngsters gets hold of another young chap, I don't know what he was called, but his mother & father was better off than us and he used to go to the same school. One day on the way to school me and Lena persuades him to leave his food in a hole in the wall of an old broken down cottage and we'd have a picnic on the way home. Well of course you see, me being artful, I was first back there and I pinched his cake, sat and ate it in this old house with the sheep that used to go in there out of the way of the flies!

We were there for a little while, everything going along all right, and the farmer used to go to market on a Wednesday and he used to drink a little bit. Any road, one day father come in from the field from ploughing and the farmer was there waiting for him. The farmer says to father, 'you haven't done enough today,' and he hit out at father whilst father was taking the gear off the horses. 'You haven't done enough work,' he said. Father hanged up the gear on the old wooden thing at the back of the horses; he hanged it up there. And the farmer was by the door. And father went up to the farmer and hit him right out to the dung heap in the yard. So, of course, that was the end of that, we was on the road again.
Contact