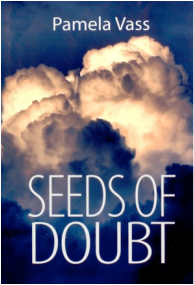 Ingrid Clarke is on a collision course with her past.

On August 15th, 1952 the worst floods ever to hit the West of England destroyed the coastal village of Lynmouth. Thirty-four men, women and children lost their lives that night. Running from the ghosts of her past, Ingrid stumbles across evidence that this tragedy was not so much an Act of God as an Act of Man. She has to uncover the truth. But others will go to any lengths to conceal their manipulation of the greatest power on earth.

Seeds of Doubt is a work of fiction but set against a background of the actual events that happened on August 15th, 1952. All references to rainmaking are factual and listed in the appendix.

“I finished Seeds of Doubt last night.  It was a great book. I loved the story, Ingrid’s voyage and struggle, and the sense of Devon and history.  The research struck me as particularly impressive... thanks again for the entertainment of a great book.”   Simon Hall - Home Affairs correspondent for BBC South West UK - author of The Balance of Guilt  -  www.thetvdetective.com

"To build a conspiracy thriller on an event as well known as the Lynmouth flood disaster, and to make it both plausible and exciting, is no mean feat. The dialogue is well written and convincing and the plot is unpredictable with enough twists to keep any thriller reader happy.”       Nick Gooding

​"When I started reading this book, I was seduced by the magic of the prose. I was transported straight back to the early eighties and accompanied the heroine on the visits to Exmoor with enthusiasm. But then I got hooked into the story and the day trip became an all-nighter! Brilliantly written and researched. I'd recommend this to anyone who enjoys a story based on seeds of truth."  5* Amazon Review

"WONDERFUL. I loved it, it has all the right ingredients - drama, tension, intrigue, love, secrets, danger and truth. Thank you so much for a thought provoking and thoroughly edge of the seat read."  Yasmin Olins

​"I loved the book and have read it twice. You deserve the five star rating." Ruth Harrison.

If you are intrigued by conspiracy theories this is the book for you. was the 1952 flood of Lynmouth, North Devon and Act of God, or could the Government have added to the disaster?  5* Amazon Review.

"Picked up Seeds of Doubt at the North Devon Show and could NOT put it down. A recommended read, especially if you love a mystery and Exmoor."
Jennette Baxter

"Thanks for a Great Book, can’t stop reading it."  Val Peacock

I thoroughly enjoyed this book. The way that fiction was blended with fact was very well done, and the list of references to the official documentation really makes you think. Living in the local area, there has always been speculation about the cause of the flood. have already bought this for friends!  4* Amazon review.

"I couldn’t put (it) down! It is an amazing story, vividly written.. some of your insights and or descriptions are so 'word perfect' and then there are the subtle sub plots! The actual theoretical basis is very disturbing - terrifying? - and so it took some hours in the day to shake off from being inside the book. Remarkable. Brilliant! Thrilling. Enthralling..."  Anna Philpott

I've just finished Seeds of Doubt and wanted to tell you how much I enjoyed it.. fantastic book and I'll be recommending it to everyone. Chris Holiday

"The main character of this intriguing story is a woman who experienced at first hand the disastrous flood at Lynmouth in 1952. Some thirty years later... she comes across material which suggests that the disaster may not have been an act of God but man-made. Her urge to find out the truth... attracts unwelcome attention from government agencies. She is forced to confront issues from her earlier life and finds her own life in danger again. With many unexpected twists, this is a book which I found difficult to put down".  4* Amazon review.

"Just had to let you know that I REALLY enjoyed your book – it is well written & constructed, and a very good read." Cathy Kingham

"What a fantastic book, you just don't know what the powers that be are up to. Looking forward to reading 'Shadow Child'." Moles Art.
Buy 'Seeds of Doubt'
Chapter One
March 1982, Salisbury, England

‘Rainmaking!’ Nick Pearce pushed the café door open and threw his dripping coat over the first available chair. ‘Are you seriously saying that...?’
‘Not me,’ Ingrid interrupted. ‘Private Dean.’
‘Who’s he?’
‘The old boy in the photo.’
‘Oh, yeah.’
Ingrid’s heart sank. Her boss’s off-hand response wasn’t exactly encouraging. She edged round the marble bistro table to the chair opposite. ‘I interviewed him yesterday for the British Legion piece. Here,’ she leant down and retrieved the black and white photograph from her bag, ‘there’s a cutting stuck to the back all about rainmaking. And before you ask, it’s nothing to do with voodoo or ancient pagan rituals. He swore he’d seen planes make it rain when he was on manoeuvres on Salisbury Plain.’
Nick slid the photograph towards him, flipped it over and scanned the text on the yellowing piece of paper. ‘So according to this, planes flew overhead, the clouds got heavier and blacker and about thirty minutes later it rained.’
‘Bit more to it than that, but yes.’
He shook his head. ‘I’ll order. What do you want?’
‘Tuna roll and a coffee. Thanks.’

Ingrid took in the lunchtime crowd. Half a dozen office workers were clustered at the food bar, probably tempted in by a leaflet campaign advertising the café’s grand re-opening. Although a few balloons and a free cappuccino with every meal hardly qualified. But they seemed happy enough; unlike the regulars, who looked a lot less at home with the stark black and silver art deco theme - not a trace of cosy red gingham anywhere.
A young mother struggled to the entrance with a baby asleep in a buggy and a toddler tugging at her hand. Ingrid scraped her chair back and held the door open. As the girl turned, Ingrid couldn’t help noticing the heavy bags under her eyes, the lines creasing her forehead, her dull, sallow complexion. ‘Sit here,’ she said, moving their coats across to the next table. ‘There’s more room for the buggy.’
‘Thanks.’ The mother pulled a high chair over for the toddler, gently removed his coat, lifted him in, tied his bib, wiped his hands, found his cup and placed a banana on the tray before sinking into a chair. Ingrid felt their closeness. It was a bond she could have known, once; but it was too late now. Work filled the gap. She’d been covering stories of triumph and tragedy at the Salisbury Post for more than twenty-five years - not bad for an agency typist who came for a week. The work suited her and, according to the previous editor, she suited the work. ‘You’ve a nose for the domestic stuff,’ he’d said. And she’d been happy enough to cover the hatches, matches and dispatches and everything in-between. Until now.
She turned back to her boss, stuck in the counter queue. He’d been at the paper for five years; semi-retired from one of the nationals. In a rare moment of confidence he’d shared his frustration at being sidelined as soon as he hit fifty. His clean sweep at the Post had been brutal, but she’d survived: more than survived recently in fact. He’d started involving her at briefings and running copy past her. Not exactly a promotion but she’d definitely been invited to step up a rung. He was different too. His clothes, routines and, lately, his mood. Ingrid watched as his eyes drilled into the assistant, intensifying every second of waiting time as she slapped two slices of tomato, some wilted lettuce, two slices of cucumber, a ring of onion and a squirt of mayonnaise onto their rolls. It was going to take more than fancy art deco fittings to up-market the market café. Nick snatched up their plates and headed back, making a point of having to negotiate the buggy and highchair.
'Oh my dear Lord, what have they done to the weather?’ Dimpled elbows pushed against the door as an overweight woman backed into the café. She thrust a pile of plastic shopping bags into an empty chair and shook her umbrella out in their direction.
‘For goodness sake.’ Nick spun round, his face soured with irritation.
'Sorry my love, didn’t see you there. Still, no harm done, it’s only a bit of rain,’ she said with a smile as she pushed on towards the counter, dislodging a trail of chairs in her wake.
Nick grabbed a paper serviette and began stabbing at the offending drops on his sleeve. Ingrid looked out the window, finding sanctuary in the kaleidoscope of umbrellas outside. Hopefully it would stop raining before they left.  She turned back. ‘I noticed the circulation figures are up this month,’ she said.
'About time.’
‘Getting behind the Hospice campaign was a good move.’
‘I guess so.’
She bit into the granary roll; mayonnaise oozed over her fingers. She licked it off and tried another tack. ‘Are you and Liz going away this year?’
'No. She’s taking Ellie to Cornwall but I don’t suppose I’ll get any time with her.’
‘With Liz?’ Ingrid asked.
'No,’ he said abruptly. ‘With Ellie.’
So Alice had got it right for once. The paper’s young receptionist had been spreading rumours about Nick’s marriage for weeks. ‘I’m sorry,’ she said. The silence lengthened. Taking a breath, Ingrid summoned up the courage to ask. ‘So what do you think of Private Dean’s story?’
Nick was lost in his own thoughts. ‘What?’
‘Private Dean. What do you think?’
'I think it’s an old boy winding you up.’
‘He was pretty convincing,’ she said.
'Yeah?’ Nick muttered, swilling his free cappuccino around an over-sized cup.
‘I’d like to follow it up.’
He looked up. ‘Why?’
'Why not?’
‘Because our readers want to know what happened last week, not thirty years ago.’
‘I still think there could be something in it.’
The toddler threw his cup overboard. Ingrid retrieved it, winning a smile.
‘Where would you start?’ Nick asked.
'Ministry of Agriculture might be worth a try. Remember the droughts in ‘75 and ‘76 when people were queuing at standpipes? Imagine being able to make it rain to sort that lot out.’
‘But according to this,’ he pointed to the faded text on the back of the photograph, ‘your Private Dean was talking about the early 1950’s. Any experiments couldn’t have been much good if we were stuck with a drought twenty years later.’
Ingrid shrugged. ‘Maybe, but think of the spread we could run if it’s true. Taxpayers money being spent on making it rain, in our climate!’
Nick pushed his empty plate away. ‘I suppose Danny could take a look, but it’d be a waste of his time.’
‘No!’ She didn’t mean to react so violently. Danny was a young career reporter at the paper. He wouldn’t be staying twenty-five years; just long enough to get noticed by a national. Of course Nick was going to pass anything controversial onto him. But not this time. This story was hers - it had to be.
Buy 'Seeds of Doubt'
Contact