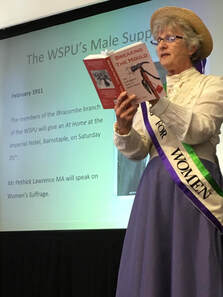 I was born and brought up close to London but as an adult I knew there was only one place I wanted to be - the West Country. I was soon feeling very much at home living, working and studying in Exeter.
After completing an MA at Exeter University, I became curious about my family tree and to my amazement discovered that before the late 1800's all my ancestors had their roots in Devon. I still find it humbling that such a strong sense of belonging can span the centuries. I had come home.
I find much of the inspiration for my books - both fiction and non-fiction - in the  landscape and people of the West Country. There are always rumours to explore, as with Seeds of Doubt, intriguing headlines that raise more questions than they answer, as with The Power of Three, or local stories to be told, as with Breaking the Mould, my book on the fight for the vote in the West Country.

I enjoy sharing the stories behind my books and welcome invitations from groups as a speaker. My current talks include:


Breaking The Mould: The Suffragette Story in the South West
On August 4th 1913, a car was spotted speeding away from a Devon mansion late at night. Moments later the alarm was raised as flames lit up the sky. The papers were filled with speculation that suffragettes were to blame. Truth or fiction? This one question opened a door to the fascinating story of the fight for the vote in the south west - not a tale of a sleepy rural backwater but of women prepared to protest at political meetings, recruit in the streets, join mass rallies in London, and suffer the agony of forced feeding in Holloway. All this ... and the biggest sleepover the region has ever known!

This multimedia presentation includes original footage and numerous illustrations from the time, first hand suffragette accounts and readings from ‘Breaking The Mould’.

Thank you for your presentation which attracted a sell out audience of 100 festival fans. Feedback following your event has been outstanding: the quality of your presentation materials, the delivery style and pace have all been acknowledged. Following Michael Palin’s event was never going to be easy but I am delighted to say that we need not have worried! … A very entertaining and informative event. Appledore Book Festival.

The Lynmouth Floods - Act of God or Act of Man?
​Many remember the summer of 1952 when disaster struck the small fishing village of Lynmouth on the North Devon coast. During one August night flash floods destroyed scores of homes and claimed 34 lives. But no so many recall suspicion circulating of Government interference with the weather. Fact or fiction? Given top secret documents were now available from that time it was a question I had to answer. This talk uncovers the incredible true story that creates the backdrop for my novel Seeds of Doubt. I include information from those secret documents, book readings and anecdotes about the research and writing process in the multi-media presentation.

I just wanted to thank you once again for your excellent talk in Thursday. I had so many people come up to me afterwards telling me how superb it was and how they enjoyed it. Many comments like "brilliant talk" and "wow, that was the best talk for a long time". Bude U3A

Whodunnit?
As a Director of ‘The Whodunnit Company’ I was probably responsible for more murder and mayhem than anyone else in the west country. How many times have you watched an Agatha Christie on TV and wanted to follow a suspicious character, crack a code, be the only one to overhear a vital clue to a death witnessed earlier? Guests on a Whodunnit weekend did all this, and more. Featuring radio coverage and numerous illustrations, this talk covers my seven years at the helm of this company offering insights into goings on behind the scenes, our tv appearance on Surprise Surprise, high profile contracts in this country and the US, managing unruly celebrities and even one genuine arrest!

Thank you for a fantastic talk.  We all really enjoyed it and no doubt will be asking you back to talk on your other subjects.  It is always pleasing when you can feel everyone enjoying the subject and buzzing with enthusiasm.  West Down WI.

Inside Care - The Story behind Shadow Child
Shadow Child tells the story of an abandoned nine-year-old boy, his fight against the care system and determination to solve the mystery of his mother’s disappearance. Why did she leave? Where did she go? This story gives a voice to children who spend far too long in care and and an insight into the challenges they face to those who hear it. This is only part of the story though. After beginning my professional career as a social worker, I changed tack and launched The Whodunnit Murder Mystery Company so this talk also covers the way in which I include plenty of unexpected twists and turns in my writing.

This multi-media presentation includes anecdotes from my time as a social worker and footage from a BBC documentary following my work with Barnardos. Perhaps surprisingly there is humour as well as a poignancy in these stories.

The Power of 3: The Story of Thomas Fowler.
‘Local Man invents Computer.' A startling headline for a local Devon paper, and one that begged the question, ‘Who was Thomas Fowler?’ Had I known it would take weeks, months, even years of trawling the archives to find the answer I might have thought twice, but I was hooked. And I’m so glad I was. Thomas Fowler was a mathematical genius who had the potential to turn the history of computing upside down. Modern assessments have even claimed that computers could have been invented a century earlier because of his work. So why are so few people aware of this humble, self-taught genius from a small market town in Devon? Tragically bad fortune and prejudice dogged his footsteps and his ground-breaking work lapsed into obscurity. Until now.

This multi media presentation includes my account of Fowler’s life and work, video, illustrations and readings from original documents of the time.

Thank you so much for the interesting talk you gave last Thursday to our Local History group. Many people have contacted me to say how much they enjoyed learning about the achievements of Thomas Fowler. Holsworthy History Society

On Course for Recovery
Some years ago I experienced a chronic illness; it was a difficult time. But slowly I came to see illness as an opportunity to re-evaluate my life, to become aware of what was undermining my health and discover how to make the changes that would support my recovery.
As a result of this personal experience, extensive research and my professional expertise as a tutor on a self-management course for those with a chronic illness, I devised On Course for Recovery. This self-help handbook forms the basis for this talk describing how it is possible to find a way back to health.

When Fact is Stranger than Fiction.
The west country holds a wealth of stories waiting for an author to bring them to life. How do we go about finding them? Perhaps with a rumour circulating about a place or an event, the starting point for my novel Seeds of Doubt. Or a snippet in a paper that raises more questions than it answers, the inspiration for The Power of Three. Or curiosity about how national events played out here, the framework for my book on the suffragettes, Breaking The Mould. This talk traces the writer's journey from original inspiration, through detailed research to the crucial decision about how the story will be told: fiction or non-fiction?

I just wanted to message you to say a big thank you for Friday. I can honestly say that it was one of the most successful author talks we have had.  Cullompton Library
​
I ask £50 per talk, plus travel expenses, and bring all the equipment I require other than a screen - a blank wall works well. I cover Cornwall and Mid/South Devon.

Book Pamela Vass
Out and about with my books. 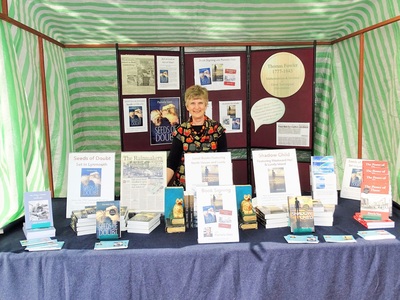 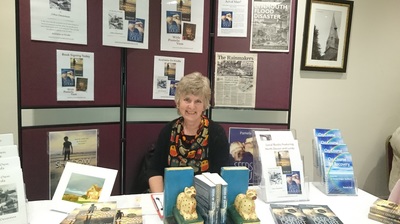 The Power of Three Book Launch 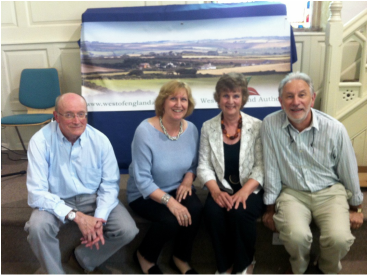 My career as a social worker with Exeter social services and Barnardos left me with vivid memories of the children in care who struggle to carve out a future for themselves. Shadow Child is fictional but inspired by, and dedicated to, those amazing young people. It was also inspired by the stunning Devon landscape.
The spectacular scenery of Westward Ho! and the island of Lundy provides the dramatic backdrop for Shadow Child. See www.northdevon.com for more stunning views .
Shadow Child has the classic twist in the tale, a legacy of my move from social work into the world of murder and mystery as Founder and Director of The Whodunnit Company. My amazingly talented company of actors intrigued, entertained and desperately fought to stay one step ahead of our increasingly skilled sleuths on themed events both in this country and abroad. ​One of our venues was in the coastal village of Lynmouth in North Devon. While working there, I became aware of rumours that government experimentation with the weather may have contributed to the devastating floods in 1952. Very little was known locally so I embarked on some intensive research at the National Archives at Kew. The incredible story that emerged from the documents there provides the thrilling background for Seeds of Doubt.

For more on Lynton and Lynmouth and the Exmoor National Park see:
www.exmoor-nationalpark.gov.uk and www.visitlyntonandlynmouth.com
Contact